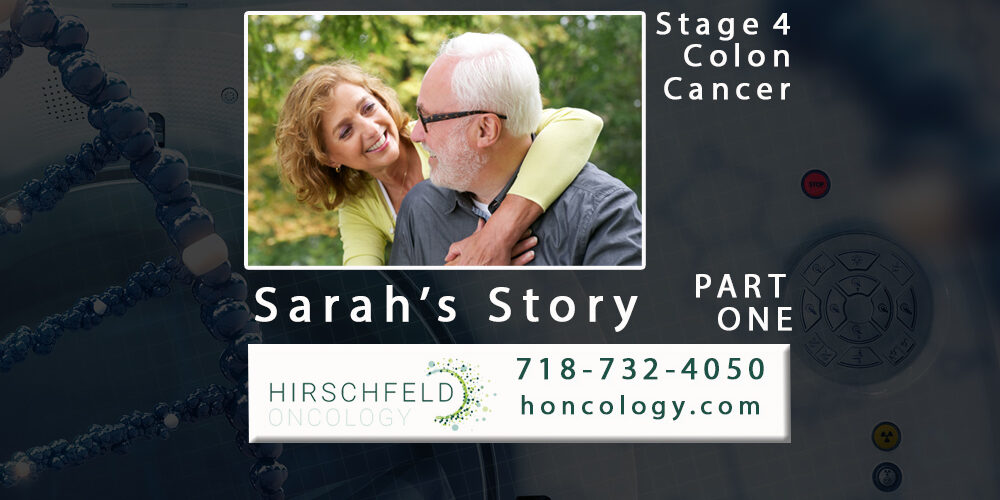 This is an interview with Sarah’s husband Bill, all about her battle against recurring colon cancer told in a series of short interview episodes. This is Episode One.

And the consensus coming back was about this wonder worker out of the Bronx, Dr. Azriel Hirschfeld, who takes cases where others have given up.

My wife, Sarah, was diagnosed with stage four, colon cancer in 2015. It’s been quite a battle between 2015 and in 2022. Unfortunately, it came as a shock because there were no horrible symptoms going on. And when we got the news from a routine colonoscopy it was quite a shock. So the process started we went to a top hospital that was really excellent and a top colon oncologist in that top hospital who was a wonderful doctor. And we fought the good fight. There were two operations between 2015 and today, two extensive operations, and a whole lot of chemo treatments.

Sarah went through the various treatments, the chemo’s, surgeries, and reached the point that her bloods were great. And she was declared clean from cancer. It was just fabulous news. She beat it. And then a few months later, the marker shot up again. And we got the news that it had come back with a passion. Back to this top doctor at the top hospital and we tried everything. Again. There was more chemo, another operation, et cetera for about a year ago or so.

A Trial and Some Hope

The doctor said she’s tried everything. And the only thing left at this stage is maybe for Sarah to get into a trial. And… given her genetic makeup, she was actually admitted to a very exciting trial that was sort of custom-made for her genetic makeup.

And they were delighted to have her. We were delighted and had a ton of hope. Sarah went through this trial and, unfortunately, the numbers shot through the roof after three to four weeks. I don’t know why, but they never really checked the markers thoroughly. And now being at a stage where she was really in bad shape she was kicked out of the trial, in a very nice way, of course. But these were clearly not the results that whichever a drug company was investing a fortune of money in this trial for, with the idea that it would beat cancer. And here she was in a lot worse shape.

Palliative Care Was the Last Thing We Wanted

At this stage we started getting calls from that top hospital, from their palliative care department, basically saying ‘there’s really nothing more, we’ve tried everything. And at this stage we just want to make you comfortable for your final battle and to prescribe all sorts of painkillers and marijuana, et cetera, so that you’ll be comfortable. There’s nothing more we can do.’

And this is when my research kicked in big time, and I made numerous calls with family members who are doctors. We know of various referral groups, and we made calls all over because we obviously weren’t ready to give the towel just because the top hospital had given up. And the consensus coming back was about this wonder worker out of the Bronx Dr. Azriel Hirschfeld, who takes cases where others have given up. And he does wonders.

This is Episode One of Recurring Colon Cancer, Sarah’s Challenge. Click here to continue the story: Sarah Episode Two.

Names have been changed for those in this testimonial.

Our team curates the latest articles and patient stories that we publish here on our blog.